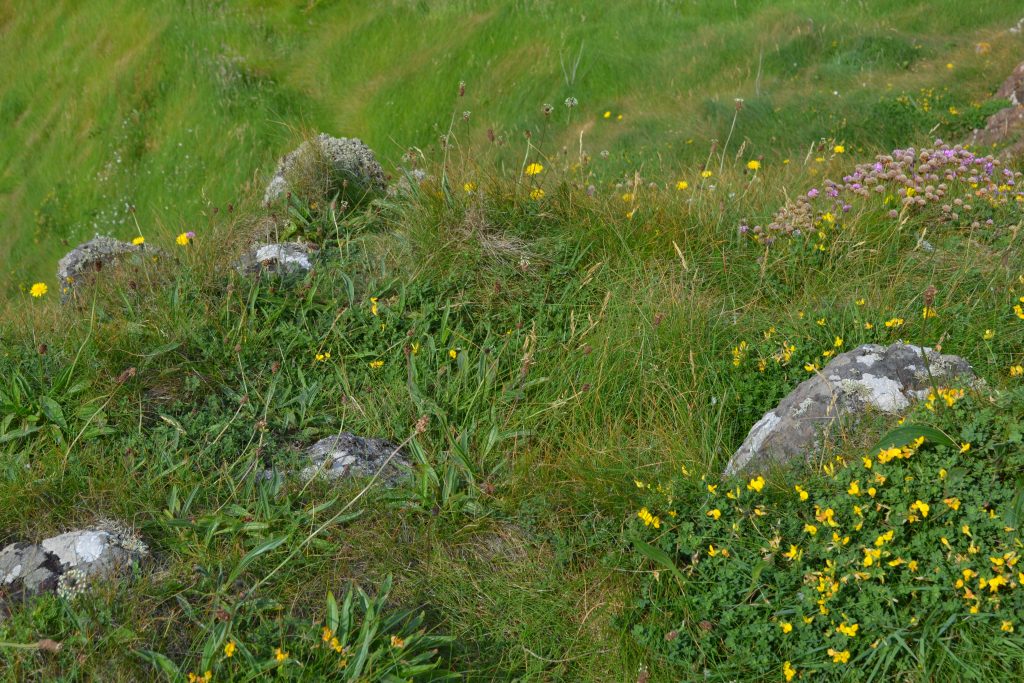 Once upon a time, a family of eight journeyed far across the sea to a distant country called Ireland. Although Ireland is relatively small in comparison to the United States, it somehow gives the impression of being far, far larger.

Beautifully cultivated farmland seemed to roll on endlessly often without a soul in sight. The quiet roads and peaceful fields appeared deserted as if everyone had simultaneously left the country, and the only remaining sign of life were the sheep grazing serenely by the roadside. The urge to climb one of the velvety, greenly-carpeted hills dotted with flowers, sit with the sheep, and read a book was, at times, very difficult to resist.

We visited three different parts of Ireland during our summer adventure. One of our stops, a visit to Northern Ireland, included Dark Hedges in County Antrim, shooting location of Game of Thrones. Perhaps it was better that I was unfamiliar with the series since, in truth, giant beech trees more than two centuries old definitely deserve to be worshipped in their own right! Upon arrival, we stepped out into an early morning mist that hung over the landscape and into an other-worldly aura of days gone by and the souls who traveled beneath these majestic trees. 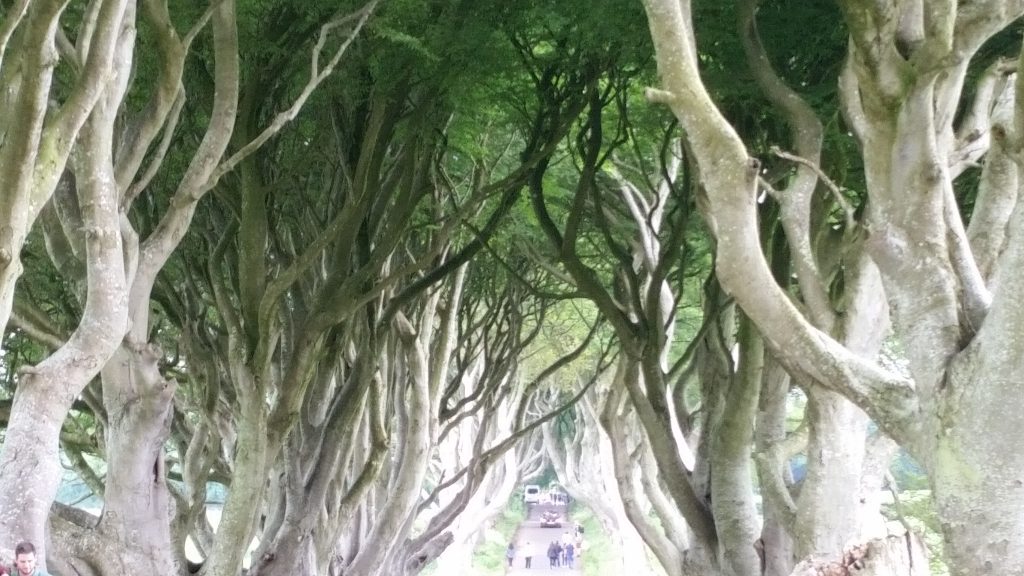 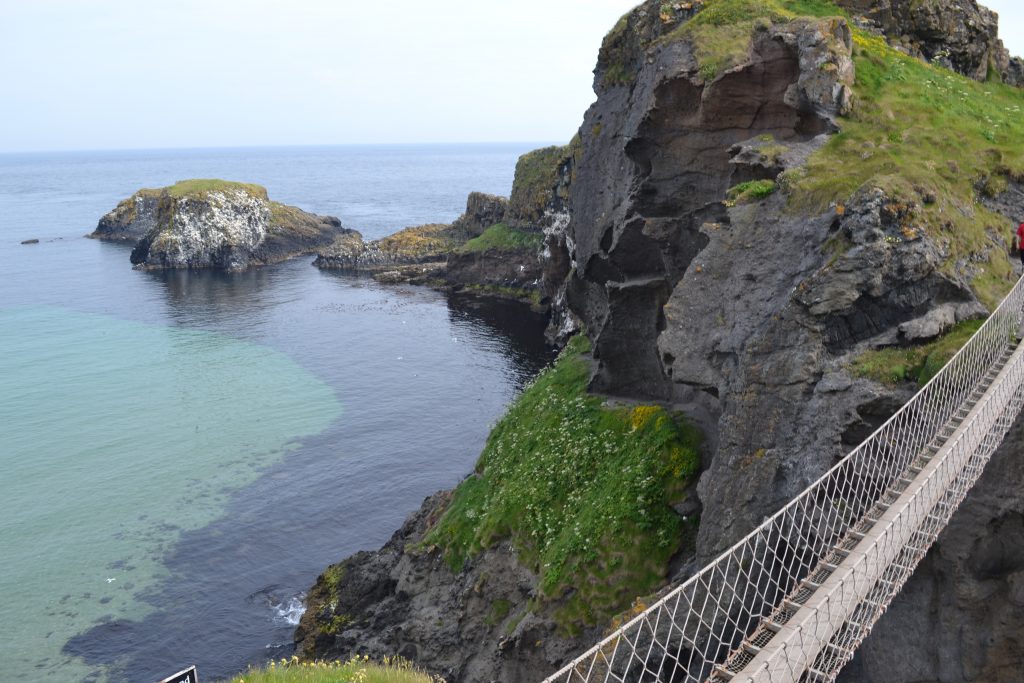 The Carrick-a-Rede rope bridge was one of my favorite stops in all of Ireland. While I wasn’t quite brave enough to cross the bridge itself, this section of the north coast is certainly one of the most beautiful places in the world. The sun, after its sulky refusal to show its face in the morning, appeared to reveal how clear and breathtaking the sea is there. The view and the isolated spot provide an edge-of-the-world feel and a silence so loud, the persistent chatter of tourists ceased to exist. 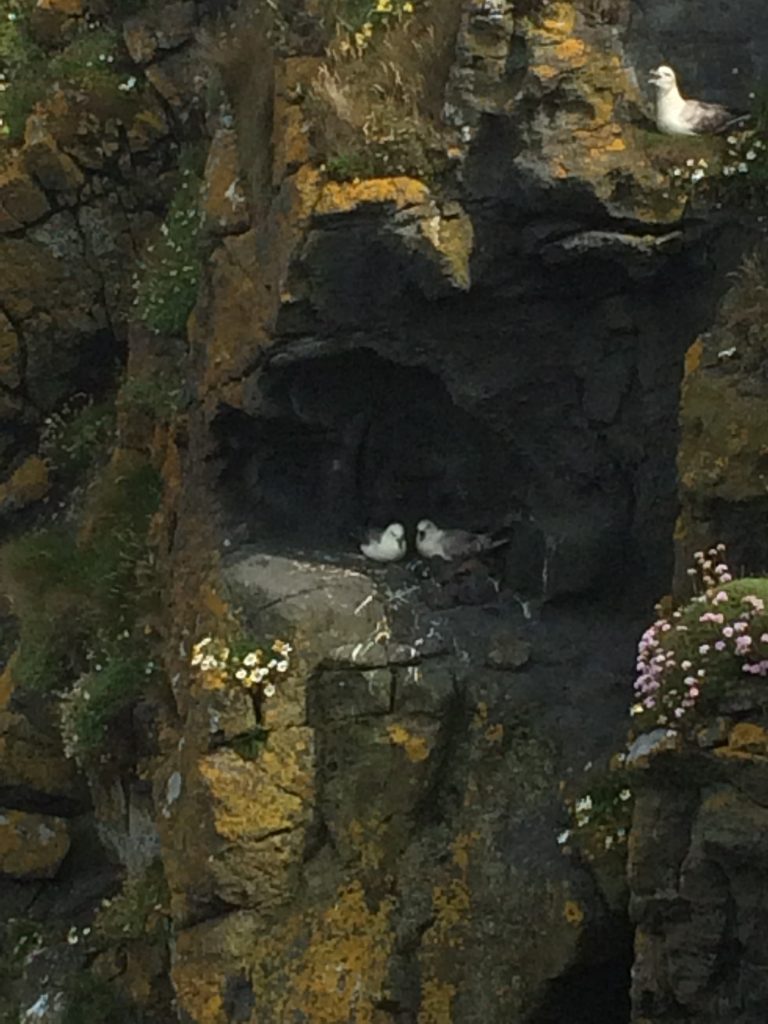 The rest of my family were not nearly as timid as I and bravely made the crossing leaving me free to make my usual futile stabs at photography. I didn’t take all of these lovely shots, (see my photography page for more info) so I can only take partial credit, but for once, I didn’t do too badly inspired as I was by such gorgeous landscape. The rope bridge was constructed three hundred and fifty years ago by salmon fishermen and serves as a link to Rocky Island. The walk from the parking lot to the bridge is quite steep and lengthy. Should you decide to visit, wear good shoes, preferably leather since cloth shoes are not a wise choice given Ireland’s damp climate. By the time we had finished hiking down and back, we were all famished, so we begged our new pal, Matt (Paddywagon Tours) to find us a great place for lunch. 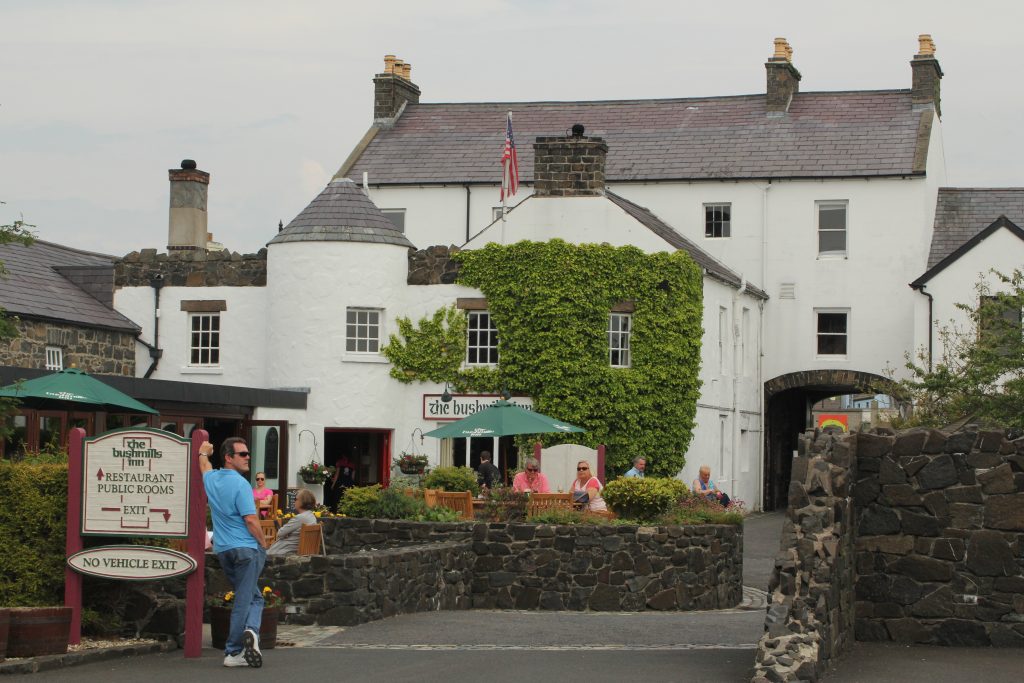 Bushmill’s Inn should have been a tourist trap. I say that because it was, well, it was perfect. It could easily be a movie set.  Imagine what a countryside inn restaurant in Ireland should look like and that’s exactly how it looked! We were seated at a lovely table on a patio that was awash with color from the flowers that spilled everywhere. The sun, determined to prove that it really did not always rain in Ireland, remained shining. Everyone wanted something unique and local for lunch, and since each selection was more appealing than the next, ordering was quite the time-consuming affair! 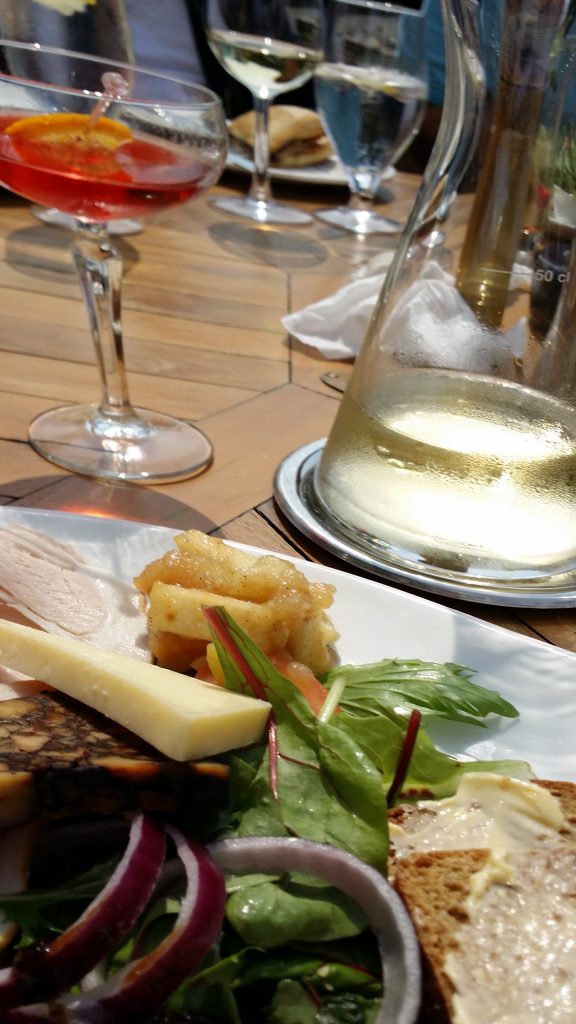 In the end, we ordered Fish and Chips, Prawn and Crayfish Salad, Gamekeeper’s Lunchbox, Pheasant Beaters Nosebag, and Charred Focaccia Bread which my mom and I decided to share.  The focaccia sounds fairly tame, but there was nothing ordinary about this sandwich. The filling consisted of Balleymoney bacon which is more of a Canadian-style bacon. Fig chutney offset the salty nature of the bacon and was accompanied by something called Cahill Porter Cheese with which I was totally unfamiliar. The sandwich was so fabulous and I was so hungry after all of the outdoor activity, I consumed a good thirty percent of it (typical) before I finally realized that I was unable to discern anything that tasted like traditional cheese! 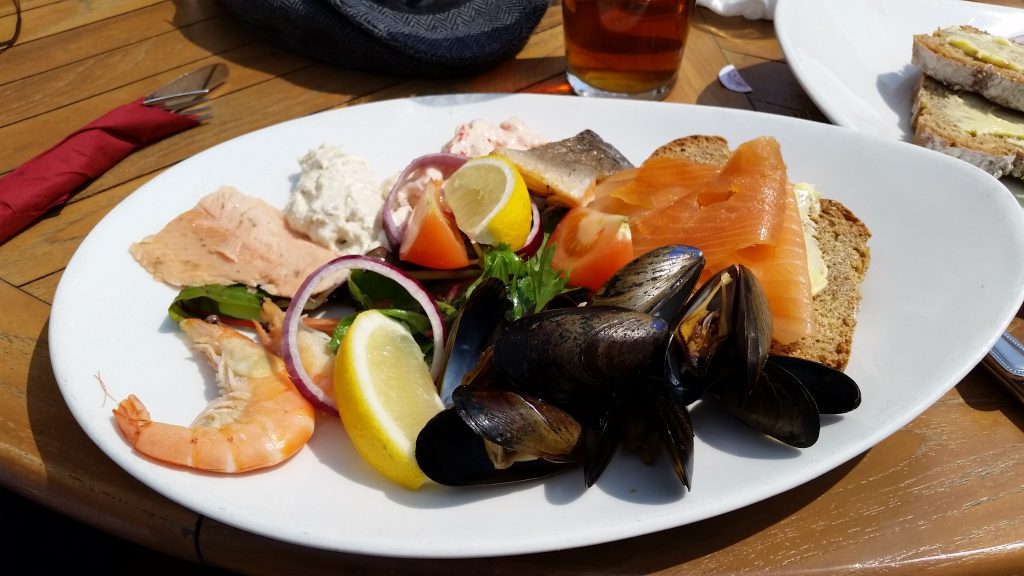 Our server patiently pointed to a dark substance that had melted nicely to the top of the bread. I had never seen cheese quite that color before, and when we asked, we learned that Cahill Irish Porter Cheddar is a unique local blend of cheese and Guinness Irish Porter, a process that was later kindly explained via email by Helen Cahill herself. According to Ms. Cahill, Cahill’s Farm Cheese Ltd. is a small cheese making operation located in County Limerick and founded by her family in the late 1970s. 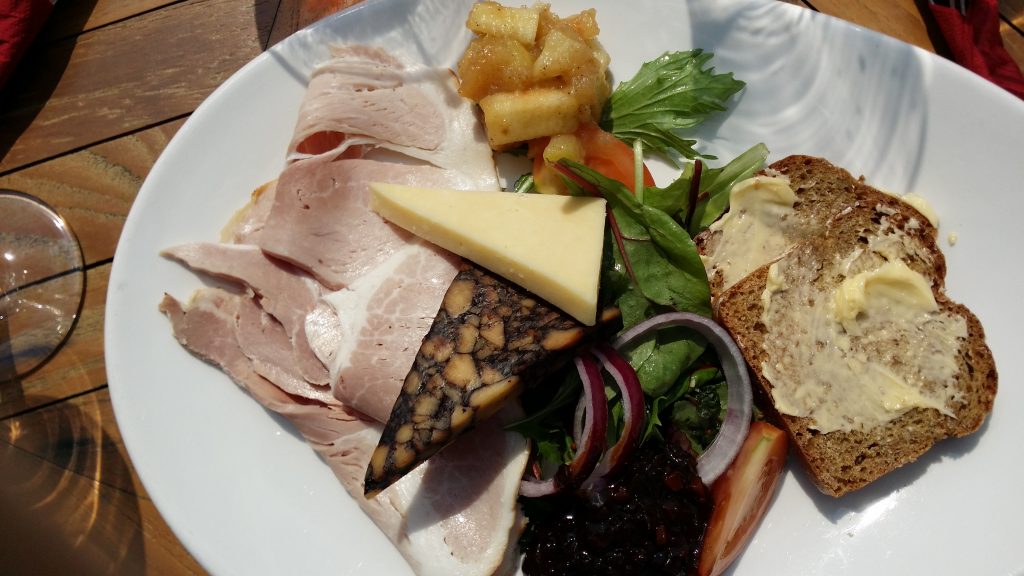 The farm is still family owned and operated. Production, since the cheese is still made by hand, is limited although this remarkable cheddar as well as many other Cahill Farm Cheeses can be found in the United States at Safeway Markets and online at Gourmet-Food.com. At least I managed to remember to take a picture of my sandwich, albeit half eaten (!!!) before it disappeared entirely. For some reason, I can never manage to remember that food blog readers really prefer pictures of non-decimated food! 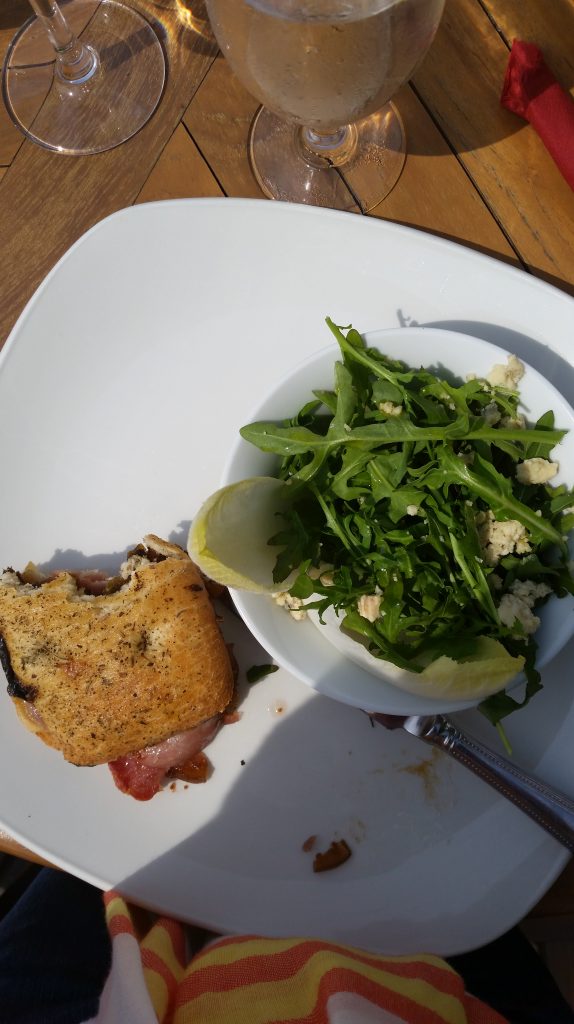 As another amazing lunch came to a close, as is our tradition, we all wrestled over the bill much to the amusement of our friendly wait staff. For once, I won! Until the next lunch and the next adventure, I leave you with one last picture, and while I should be embarrassed to post a photo of this half-eaten carnage, when it comes to great food, somehow I never am!