As our van winds along roads flanked by dry fields—it is the dry season in Sicily—and through tunnels too numerous to count, I find both foreign and familiar things to observe. The navy-blue Mediterranean stretches far to one side of our vehicle while hilly fields of dried golden grasses or crops, bolstered by stone, step up the hill on the other. A rainbow of laundry flaps on clotheslines, and the tiled coral-colored roofs contrast against the blue sky. 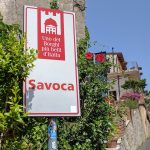 The “foreign” is fresh and new, energizing as visiting a new place always is, and I can’t manage to take enough in as I try to look both right and left at the same time. I see a church spire, crusty with years, rising against the blue Mediterranean as we speed toward Savoca. A small brush fire rages; no one is concerned. Again, “It’s the dry season,” the Italians say and shrug it off.

The driving culture in Italy is fascinating. Luca, our tour guide, the picture of Italian charm with his white, even smile and scarf casually slung around his neck, passes an elderly man driving an equally elderly Fiat. The car, hardly more than a toy, putters along holding up other drivers who honk, not so much in the anger and frustration we are accustomed to in America, but in a restrained—“Old man! You’re holding us up!” manner.

The octogenarian continues on his way, serenely oblivious to his role in this mini traffic jam. We see another driver come to a stop in the middle of the street to chat with a pedestrian while other vehicles, forced to an unscheduled stop, trail like ducklings behind their mother. Again casual honking and the throwing up of hands ensues, but no frustration or malice is intended. The message is simple, “Be on your way, so I can be on mine.” At some point, the offending driver finally relays whatever message is so important the delivery must inconvenience all the rest of us, and we all move on. 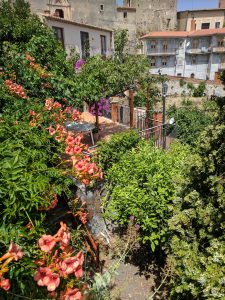 Savoca is busy, although not, we are assured by Luca, as busy as it would be later as he has ensured an early arrival. We roam, taking pictures of the monument erected to Coppola and The Godfather, the film Taormina and Savoca are famous for, and jostle with other tourists to capture picturesque images of one another against the backdrop of the Mediterranean and the village below. In the courtyard, visitors wander, and a female vendor wearing yellow is selling limoncello beneath enormous trees, her cart brightly adorned with lemons. 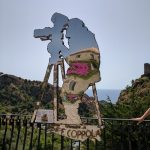 I have had quite enough of the crush of people. We ask Luca where to go next, and we begin to ascend the steep, ancient streets of Savoca. Up and up we go. After the humidity of Florida, the dry climate is unfamiliar, and the first beads of sweat are almost surprising.

We pass hordes of tourists struggling in the heat until we pass the final stop where a modified quad vehicle deposits tourists unable to make the cobble-stoned climb. Suddenly, we are alone. We hear nothing but birds and a breeze that only slightly ruffles the leaves of the orange and lemon trees. We take pictures as we approach Chiesa Madre—The Mother Church—built in the twelfth century. There is not another soul around.

We enter the church and find reverent, absolute stillness. We see ceilings painted with ecclesiastical scenes in celestial colors that soar above the sanctuary. The many spirits who worship here are respectful and do not disturb us, here a monk passing by, robes brushing the floor, there a peasant and his family celebrating a baptism, heads bowed. It is hard not to feel God, whichever God you might worship, in Chiesa Madre. Regardless of faith, visiting this church, and Savoca, is a religious experience beyond the biblical sense as immersing oneself in history, beauty, and culture always is. 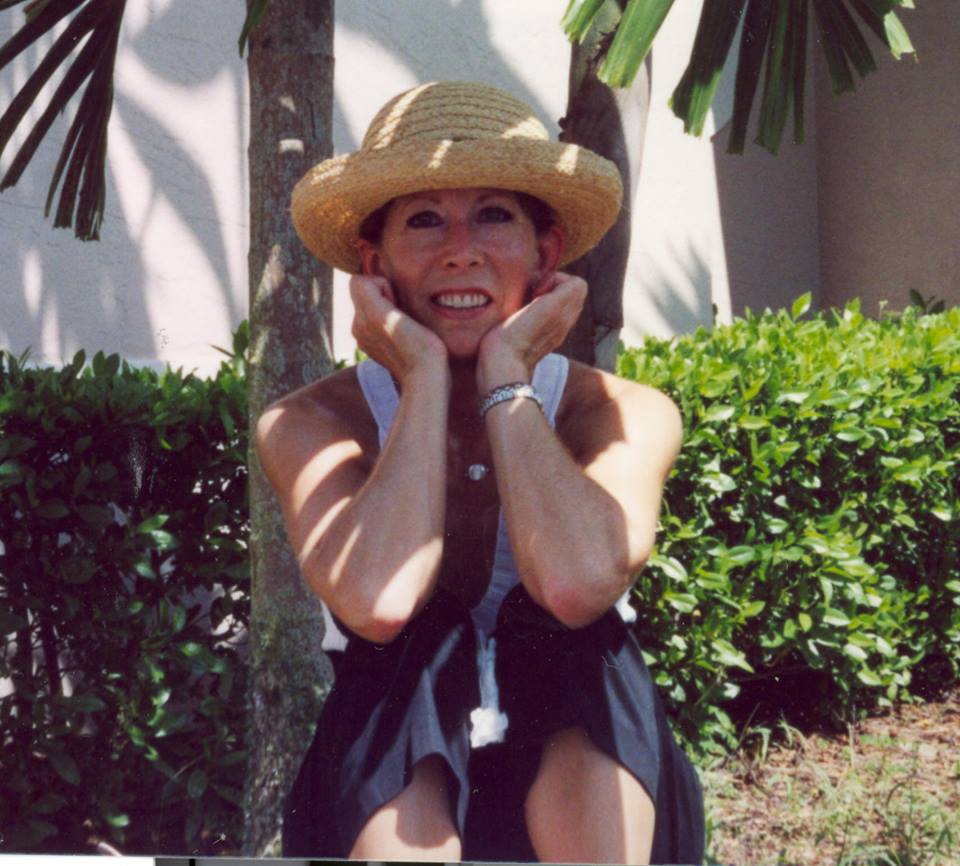 Who do you want to be during Covid-19?🤔 Came ac

Had to check and make sure the ocean was still the

Thanks @tattedrunnergrandma for this! I count on y

Iakwe! 🌈 You are all rainbows, my friends. 😘

Who makes these rules anyway? I like the word, "me